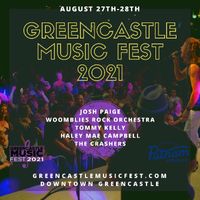 The Greencastle Music Fest was originally created in 2010 by restauranteur Gail Smith to celebrate the 20th anniversary of Almost Home Restaurant on the square in Greencastle, IN. Well received by the community, it has become an annual summer event! Things to Know Before You Go!

$10.00 admission fee each night Tickets will be available in advance, online via On Tap Tickets (details coming this summer) Children 10 and under are free Entrances and Exits: Washington St. and Indiana at ONB, Jackson and Franklin St. and Indiana and Columbia St. by the free parking lot Lawn chairs permitted on the courthouse lawn only No coolers, thermos, flasks or beverages allowed No pets allowed, except for service animals No weapons of any kind allowed All restaurants will be open for fan dining Small strollers allowed Port a lets provided in several areas Street food served by Almost Home Kids Area is open 3:00-7:00. All games free All areas, including entrance booths accept cash. Food and beverage tickets are available for purchase (via cash or charge) and can be used for all items purchased at the event, including tips All tickets are $1 Friday Night: